This Pier was privately owned, yet not rigidly enforced. Local Fishermen, could tie up their Boats here, and one particular gentleman, tells of calling to the House (Murrough House - the House attached to the Pier ) to give Mackerel to Eileen.

The Pier today (2020), is half broken. Some is already in place to be washed away and broken further by the Sea.
North of the Pier, is a dedicated route to it - well the overgrown remnants of a route to it, from the House. It is walled in, with a gate at its south end. It would have been a different story back in the day, where it must have had a ring of exclusivity about it.
Access by the Shore, is rocky, or more correctly - stoney, more stones than Sand.

View.
You can see the House from the Pier, so it can see back. See Photos.
You can see Roscam to the East.
Rabbit / Hare Island is clear, as is the Lighthouse on Mutton Island and the Island itself.
Galway Bay, is about.

There is an old story that the Terryland  River, which sinks at Pulavurlleen, might emerge around here? 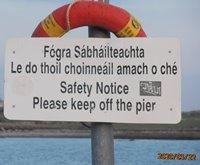