Merlin Park Castle is one ofmany Castles which were in the Parish of Castlegar, Galway, before it contracted or expanded into new parishes. 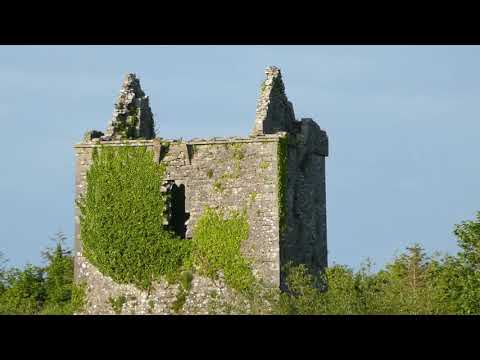 Supposed to a tower of Charles Blake; this is still a fine example of stonework / craftsmanship. You'd imagine that they are larger in dimension, but seem to favour height for view advantage and depth for security. At 97 feet, there was little to obstruct the vista, covering Galway Bay and westwards to the City. Eastward, would have been good too, with limitations to the North.

This building is said to have a (Sheela na Gig - See Wikipedia in a new window) carving above one of its windows, and on the inside. It doesn't exactly look a Sheela ná Gig though, so someone will have to verify this? As this building is padlocked shut, we don't have access. Incidentally, there is only one visible door on the ground floor - on the South Facing side, where you see the markings of an extension long gone.

Your Home is Your Castle
THE MAYOR Of Galway Councillor Henry O'Connor recently inspected works being carried out at the new Merlin Park Woods by Fas under the direction of Bardas na Galllimhe.

Two old stone dwellings have been discovered so far and are believed to have been built by the Fureys from Baileban  and Deoc Uische over two hundred years ago.  Remains have also been uncovered of an intricate pattern of substantial walls enclosing fields of rock . The Watercourse which flows through the middle of the Wood, is overgrown and inaccessible and is now being opened up.

The Mayor led the Party through newly developed walks , and then ascended the 16 th Century Castle He was astounded at the great state of its preservation and its potential for developing as the highlight of the entire project. He also commented on the value of the estate to Students of social History have also been uncovered of Students of Social History  showing the contrast between the lifestyles  in the fortified Tower an intricate pattern of showing the contrast between the humble stone thatched dwellings close by.