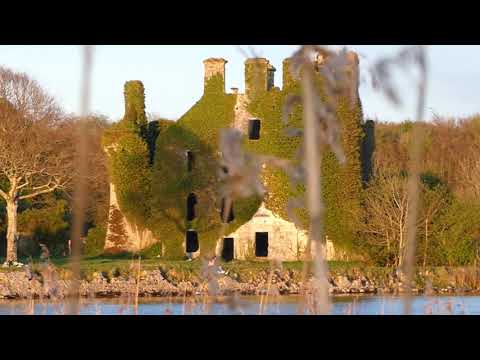 ^  Video above May of (2021) - this Castle has been treated in some way, to inhibit thr growth of Ivy.
Sho, from Dangan - the opposite River Bank.

The House itself is built from Limestone, as are the Sheds, Entrance  and River Embankments.  Some of the missing Embankment Stones are still close to where they came from - offering the possibility of re-constitution.

Menlo Castle has its own Quay / small Harbour still protects against the current from the Lake and offers safer boarding for those who come and go. 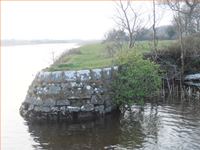 The Fire, at Menlo Castle

Tom Kenny wrote an insightful article about the specifics of "The Fire at Menlo Castle" , with a photograph of the time -Read it in a new window Interesting!

The size of the rooms can be estimated, and are small enough. The fire consumed the timber, trappings, paintings and ceilings. Some of this residue increases the floor height.

^This wonderful view of Menlo Castle, has been offered to the Public Domain at http://en.wikipedia.org/wiki/File:Menlocastle.jpg

Noticeable at first glance, is the proliferation of Ivy - a Green Blanket, disguising almost,

The sound effects are coming from youngsters on the other side of the River Corrib- and the cox of a rowing boat. It must be the natural acoustics and peaceful nature of this place, that makes these sounds seem much closer.

The Avenue feels solid underfoot, but no longer looks it - and passes through a dip greater than ten foot. The sheds are on the right of the approach.

The Castle has many windows, maybe more than all our other Castles put together; implying that security was less of an issue.

Forenames can be passed down, a lot.