The Galway to Clifden Railway Line.

Heading West from Ceant, it went through the Hill at the Fairgreen, across Fostrer Street at Street level,  across, through and under the Bohermore Road via a Tunnel, exited that Tunnel the other side of that Bohermore Hill, across the Headford Road on top of Limestone Stacks which kept it elevated, across the Corrib River, and then swinging Eastwards by Dangan and alongside that River.

The Tunnel at Prospect Hill.

See a Turntable in action at Mullingar, and how easy it all looks.

Image below of the Viaduct from the National Archives.

Many Businesses carry this name now, but it was once the name of the Dublin to Clifden Train Journey.
While it more or less began in Broadstone (Phibsboro, Dublin), the trip from there to Recess was only 5 and a quarter hours?

(Thanks Padraic)  Bridge. Moycullen. Just 220 Metres East of the Station there.

Another House, at a Level Crossing, and in fine fettle. (Thanks. Ray). And, of a similar style, size and materials. You might wonder, why a Hotel was even needed in Recess back then. It was all about Fish, wealth, and leisure.

^ Image above from the National Archives. 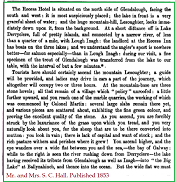 In 1853, the Clifden Line was not yet born, but we still had Bianconi's Car.
"The Recess Hotel is on the high-road from Oughterard to Clifden—distant from Oughterard fifteen miles, and from Clifden twelve miles: so that it is easily reached from Galway in the day; Bianconi's car, which leaves at nine o'clock, arrives at the Recess at two,—leaving ample time for visiting the lakes or ascending the mountain before dinner."

"At 33 miles from Galway is Recess, where we stop first at the
small station belonging to the splendid hotel of the M.G.W.R.
Company ; and, one mile beyond, reach the principal station."

^ It was in here, with the Hotel behind the Camera and to the North.

"The lowest charge for fishing some of the lakes is 15s. per day, or £3 15s. per week, plus man and boat, and the usual extras. The " Recess " hotel tariff is 10s. 6d. per day for bed and board, and I believe the other hotels charjje the same."

Fishing, wasn't always free, which might help in understanding the following - "Beyond Ballynahinch the line runs through a wild and rugged district giving a splendid view of the Twelve Pins About half way to Clifden a glimpse is caught of the tall poles of the Marconi installation at Mannin Bay."  Refernce

A.K.A. - The Clifden Station House Hotel.

"The town is dusty and uninteresting ; so late as the year 1815 there was only a single house on the site. Its origin is due to Mr. D' Arcy, who first pointed out the advantageous position, and offered "leases for ever, together with four acres of mountain land, at but a short distance from the projected town, at twenty shillings per annum." Ref. -Guide.

"A railroad between Galway and Clifden Was finished only six weeks ago, but as the con- tract with the coach line has not yet expired, the latter still carries the mail between the two cities.

As we plod along in our primitive way, we hear the shrill whistle of a locomotive, and see the train speeding over the new road, and, viewing the two modes of travel, the old and the new,

I am impressed with the perseverance and progress of man, in pushing capital into quarters so firmly stamped with the spirit of antediluvianism."
An Account published in 1899, above - The British Isles through an Opera Glass.

Image above (click, to enlarge), is a 0-6-0, which basically means that the 6 Wheels (3 on each side), are driven. Zero wheels are leading, and zero are trailing - from a Power Transmission perspective. To put it another way - six Wheels are connected by Con-rods, in this case..

The Connemara Greenway, seems to be a Project/ Campaign, to promote the use, deviopment and official Planning permissions  - to establish the Galway to Clifen Route, as a potential Cycle and Walk way.
In principle - it is a fine idea.
In practice - it  will take some "ironing-out", and is incremtentally advancing.